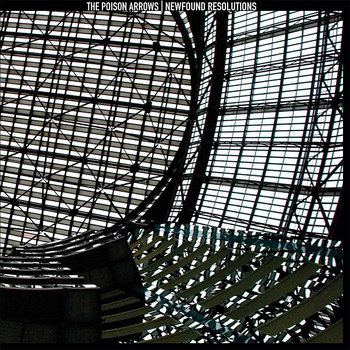 Description:
A mere fifteen months after the release of their acclaimed debut LP First Class, and Forever (May of 2009, File Thirteen Records), Chicago’s The Poison Arrows follow up with a more ambitious sophomore album Newfound Resolutions.  Even at over 70 minutes, this second album was completed in a fraction of the time of their first album thanks to their growing experience as a band, and real-world thematic inspirations.  Let’s face it, the past year or two have been challenging for most.  Members of Chicago’s The Poison Arrows are no exception enduring a number of unthinkable dramas better interpreted within the album’s lyric liner notes rather than explained here.  So Patrick Morris, Adam Reach, and Justin Sinkovich did what most friends do in such dire circumstances, they sat around listening to records and talked it all out. There also happened to be a recording studio in the basement full of instruments where they expeditiously wrote and demo’ed their new album.

As The Poison Arrows did with First Class, and Forever, the band then went into Steve Albini’s Electrical Audio Studio A with engineer Greg Norman to record the basic tracks.  Album two was then overdubbed at Justin’s basement studio The Plaza where a series of close friends also contributed guest appearances.  It was then mixed at Justin’s house and Greg Norman’s home studio.

Some songs on Newfound Resolutions include up to four bass guitars and three drum sets, yet the album is far cleaner and more live sounding than the first.  Patrick Morris’s now-signature bass playing is more unorthodox, intricate, and inspiring than ever.  Adam’s thunderous drumming is something to behold, performance-wise even beyond the last album, and captured so well by Greg and Electrical Audio that not a single effect or EQ was used on the drums.  Justin’s keyboard’s and guitars are his most abstract, melodic, complex, and well constructed.  Lyrically each song addresses past drama or the process of reconstituting normalcy.  Every track was completed as a chapter in an overarching tale of lives falling apart, then reconstruction, then reflection, and finally a vow to move forward, thus the album’s title Newfound Resolutions.  Fittingly Sinkovich’s vocal delivery tells the story more broadly than before ranging from his more typical cold, swaggered, surly, Baudelaire-inspired recitations like on “Interpretive Hunter” to a new more fragile spaced surrealist despair as heard on the opening track “Flawed Acumen.”