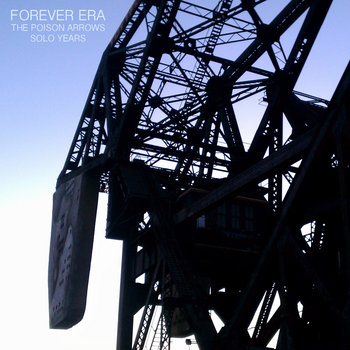 Before Chicago’s The Poison Arrows became a full band, singer/guitarist/keyboardist Justin Sinkovich was experimenting solo with electronics and noise under the same name. He played a handful of shows locally and on a short tour of the East Coast.  He mainly locked himself into his home studio and recorded.  The tracks ended up on a couple of compilations, and the ‘Trailer Park EP’ released in 2004 on File 13 Records.  A remix album called ‘Premix’ was released on in 2006 featuring remixers like Martin Rev, Brian Deck, and Jonah Sharp preceding the to-be debut album.  Short videos accompanied each remix as well.  That debut solo album never came out.  Instead, The Poison Arrows became a band, released their first EP in 2007, and began touring and releasing music until going on hiatus in 2010.  The solo tracks sat on hard drives with some complete, and some in pieces.  Justin remained active in contributing electronic production for The Poison Arrows as a trio, and occasionally worked on a solo song.

Since The Poison Arrows the band has reactivated in 2015, File 13 took this opportunity to compile ‘Forever Era,’ a collection of the old solo work.  It shows a variety of noisy medium-fi electronic directions. The album is being released in our digital store, plus major digital music services on August 21, Justin’s birthday.