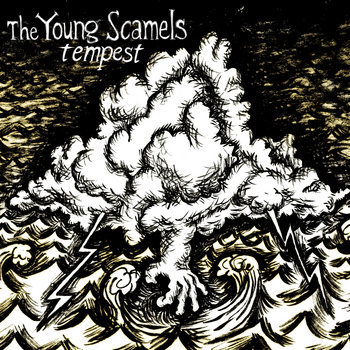 BAND BIOGRAPHY:
The Young Scamels are Christian Frederickson, Greg King & Jason Noble (with special guests
Amber Estes, Jeffery V. Thompson & Kyle Crabtree). Christian, Greg and Jason have made a general caterwaul
over the last 15 years as members of the band Rachel’s, touring America and Europe several times. They have
worked on six albums together and numerous theater and film projects including Rotating Mirror (2008),
Systems/Layers (2005) & Our House (2010). The band was created in 2007 for a production of Shakespeare’s
The Tempest at Actors Theatre of Louisville. The album collects music that was played live during forty one
performances of the show.

PRESS QUOTES: Rachel’s - “Systems/Layers” ( 2003)
“It’s a brilliant ambient musical experience - you can tune it out if you choose and it’ll still enhance your
surroundings, or you can engage yourself fully and allow it to positively hypnotize you.” (Pitchfork)

“A meditation on modern urban life that lets the city shine with mystery, menace and grace.” (Q Magazine)

“Like David Byrne’s underrated orchestral epic “The Forest” or Philip Glass’ “Koyaanisqatsi”, “Systems/Layers”
is cerebral and human, transporting you without insulting your intelligence.” (All Music Guide)

Reviews of The Tempest at Actors Theatre of Louisville
Directed by Marc Masterson (2008)
“Unlike most of Shakespeare’s comedies, The Tempest is tough to pull off if you
don’t have decent composers on your side. It’s full of music but doesn’t come with
a score, and in the wrong hands, that’s a dangerous thing. Good thing Actors
Theatre teamed sound designer Matt Callahan up with members of the band
Rachel’s. {The music} was a perfect addition to a production that incorporates
both contemporary and classic elements into the sets and costumes. The musical
needs for this show range from the terrible opening storm to Ariel’s delicate solos
to the hearty drinking songs of the fools, and their original compositions really
made those scenes shine.”
~ Erin Keane / Courier-Journal, Louisville, KY
“The play, generally considered the last that Shakespeare solely authored, is
unequivocally a theatrical dream. It practically begs for spectacle, and regarding
such, Actors’ production is firing on all cylinders. From the billowing sheets and
pouring sand that symbolize the tempest to Ariel and Caliban’s ingenious costuming
to the ethereal live accompaniment of {the band}, the show is a sensual delight
that whets the appetite. In fact, I collectively credit the designers with speaking
most powerfully in this staging.”
~ Rebecca Haithcoat / LEO Weekly

What’s a Scamel?
No one knows for sure. Shakespearean scholars have wondered about the word for a long time now. It could be a misprinting or bit
of 17th century slang. It’s from a rather beautiful bit of text where Caliban offers Stephano and Trinculo a series of delicious sounding
items, trying to convince them to help him overthrow Prospero, the ruler of the island. “I’ll bring thee to clustering filberts and
sometimes I’ll get thee young scamels from the rock.” Marc Masterson, the director of the production, started calling us The Young
Scamels during rehearsal… we just had to keep it.

Actors Theatre of Louisville
We love working with big collaborative groups, and it’s a good test to make a lot of material under tight time schedules. Marc
had very strong ideas about the music but gave us a huge amount of freedom. Matt Callahan, the sound designer at ATL, worked
closely with us to shape the show and developed a way for us to play live on-stage and off. This was a new way of working for us
because the actors sang during the show, so we wrote certain songs with each character in mind. We built much of the
material based on the whole cast being in the room with us, and had a permanent small studio set up in the room from the beginning
of the rehearsals. On the technical side, everyone was wired up and performing songs in the round, often with Ariel (Eric
Bondoc) literally flying around the room. Pretty fun. Kinda insane.

On the stage
During a large wedding scene we (the band) mysteriously arrived – wearing all white (with a little sparkle here and there). Then
we disappeared again to play from our cave. Our stage names were Bracken, Tangle and Thorn. The production crew actually
made us business cards.

Amber Estes (Vocalist)
Amber helped us adapt the text from the play before we presented the songs to the cast. She recorded demos of many pieces with
us so the actors could have a version to learn and “hang out with.” She performs with several bands in Louisville - Liberation
Prophecy, The Sandpaper Dolls and Invaders… and we’d wanted to work with her for a long time. Once the run of the show was
over we began to document the music and she returned to track final versions of the songs she helped create. She also worked on
the mixes with us.

Drums?
Kyle Crabtree helped us work on drum material and helped us set up the strange arsenal of gongs, bells, toms, & cymbals that we
used each night in our “band cave” (actually an alcove high up in the main theater room with audio and video monitors). He also
recorded the final song on the album ( “A Contract Of True Love”) with us.

Recording the album
Kevin Ratterman was cool enough to work in several different locations to document the show. About 50% was recorded in the
room at Actors Theatre… since the show was already engineered for live music we recorded two performances with the audience
present and then tracked for a day or two while the theater was empty. Jeffery V. Thompson (who played Caliban) recorded with us
and gave us a lot of direction on the whole sound of his character. We took that material and other elements we made for the piece
(sound design and electronics) and expanded them in our home studio and at The Funeral Home (Kevin’s place).

The biggest difference between the show and the album
We had a chance to work with so many awesome people – and many scenes involved us playing live sound effects and doing wacky
foley work. A lot of that material didn’t work as “audio only”... it would have been great to include more of the physical acrobatics
and light-hearted moments. Also, the show was about 2 hours so we edited quite a lot. Many of the instrumental sections had
beautiful text and performances... without the live play we had to choose what worked as stand alone music. A few pieces actually
were made longer and the orchestration was changed in several tracks.

The Tempest
Like most writing, the more you “live with it” the more detail and layers develop. Our first impression of the play was that it was
whimsical and romantic, but there are very interesting, even controversial, elements of colonialism, ideas of government,
murder. The real heart of the show seems to be about giving up power and finding forgiveness in yourself. Very rich material to
try to adapt… and so many people have made incredible versions of this play. It was actually kinda intimidating.